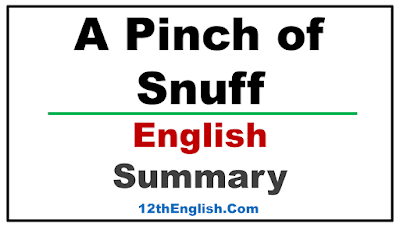 ‘A Pinch of Snuff’ is an exciting story full of wit and humor written by Manohar Malagaonkar (1913-2010).
He was a noted novelist and short story writer. This story is taken from his book “Contemporary Indian Short Stories in English“.
Nanukaka is the main character of this story.
He is a man equipped with tricks to deal with any kind of situation anywhere.
Nanukaka comes to her sister’s house in Delhi, as he has to meet the welfare ministerin Delhi.
He goes to the minister’s office to meet him, but even after waiting for hours, the minister does not meet him and calls him after three days.
While returning, Nanukaka meets the head of a political party, where he comes to know that the welfare minister’s daughter is going to be married to the son of the Maharaja of Ninor.
He plays a trick.
He tells his sister’s son to rent a grand car and pretend to be his driver and he himself arrives at the minister’s residence dressed like an astrologer.
In the visitors’ book there, he describes himself as the astrologer of the Maharaja of Ninor and returns by writing his current address.
On seeing the name of the astrologer of the Maharaja of Ninor, Welfare Minister rushed to meet the astrologer and himself arrives at Nanukana’s residence.
Thus, Nanukana easily meets the minister.