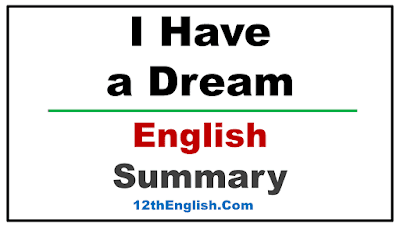 Summary: I Have a Dream – Martin Luther King Jr.

“I Have a Dream” is an excerpt from a historical speech given by the great Negro leader Martin Luther King Jr. (1929–1968).

He gave this speech on August 28, 1963, on the steps of the Lincoln Memorial in Washington DC.

He was awarded the Nobel Peace Prize in 1964, the youngest person to receive it.

In this speech, he is addressing the Negro people of America at the time who were struggling with poverty, neglect, discrimination, and inequality.

On the appearance of some white people in his speech, he calls it his symbolic victory and asks the Negro people not to hate the white Americans.

In this speech, Martin Luther talks about his dream of an American society in which there is mutual harmony between blacks and whites, no class is exploited on the basis of its character, white children mix and play with black children. All the trenches of inequality in society should be erased.

This historical speech by Martin Luther reflects his optimistic stance.

This speech gives strength not only to the Negro people but also to all the people of the world who are suffering from racial discrimination.