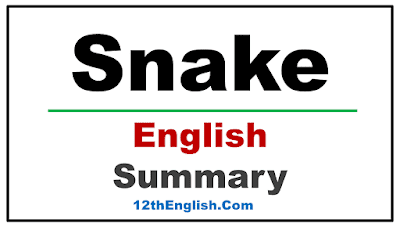 This poem is based on the human spirit of misdeeds and guilt between the rites given by society and their instincts.
This poem also shows the artificiality of our modern life.
In this poem, the poet describes a day of summer when he encounters a snake.
The snake came to drink water in his water-trough. It was a brownish-golden snake and he finds the poet very attractive.
The poet stops there and waits for the snake to leave.
The poet liked the snake but his education was encouraging him to kill the snake immediately. But the poet finds the snake absolutely innocent and beautiful, so he does not kill it.
But when the snake is going into its burrow after drinking water, he throws a piece of wood into the water. Fearing which the snake turns and sees, it quickly penetrates its bill.
The snake did no harm to the poet. Poets immediately regrets his act. And he wants the snake to come back again.