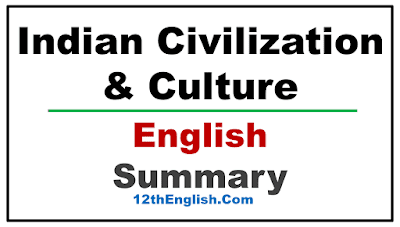 He says that Indian civilization elevates the moral values ​​of life.
Our ancestors were satisfied and happy even living in small villages because they did not give undue importance to luxury and physical pleasure.
Gandhiji believed that physical comfort and luxury to a certain level is fine, but we should not get used to them.
In the essay, Gandhiji is never prejudiced about other civilizations.
He emphasizes the integration of the best things of Western civilization with Indian civilization. According to Gandhiji, civilization is a path that leads the people of the country towards their duty.
Gandhiji mentions some features of Indian civilization, for example – “Simple living, High Thinking”, “Live and let live”, etc.
He points to moral elevation and self-satisfaction as true happiness of mankind.
He believes that the human mind is like a restless bird, which is always unstable. It is never satisfied. He also boycotts the accumulation of wealth.
In this essay, Gandhiji refuses to imitate Western civilization blindly. He says that it is the duty of every Indian to follow the high ideals of Indian civilization.