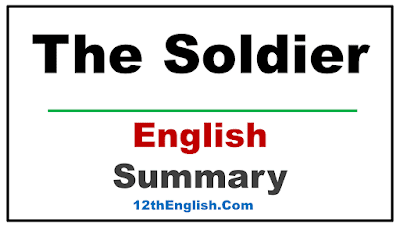 The Soldier is a patriotic sonnet. It has been composed by Rupert Brooke.
Rupert Brooke was the most handsome man of England of the time. He was a lover of peace as well as of his country England.
The poet’s heart is overflowing with a sense of patriotism.
He says that an English soldier fights in a foreign land for his country England.
Life is uncertain in the battlefield because no one knows what will happen there?
So, the poet says that if he dies in a foreign land that land would be forever England. Because he always carries an England within him.
He has got everything from England. He extends his gratitude to England.
He expresses his gratefulness to his country time and again saying that even noble thoughts, happy dreams and a sense of laughter have come to his mind from his motherland England.
He says that all sins of his will be forgiven if he dies for his country.
The poet here dignifies the act of a soldier.
The poem gives us a strong sense of patriotism.