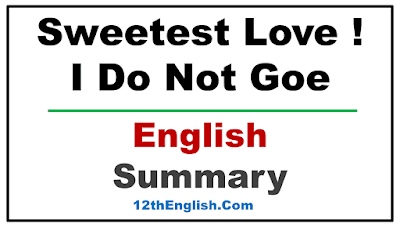 English Summary: Sweetest Love I Do Not Goe | John Donne

‘Sweetest Love, I Do Not Goe’ is a metaphysical poem written by John Donne.

In this love poem, the poet portrays the power of true love.

The poet tells his beloved that he is not running away thinking that he is fed up with it or he is expecting a better love or “fitter love.” He is going because he has a desire to die in the state of bliss. He wants that when death actually comes, he is fully prepared to face death.
The poet assures his beloved that he will come back exactly as the sun comes back every day. The poet promises him that his return will be faster than the sun because he has reason to return soon.
The poet tells his beloved not to mourn his visit. The pain of the poet is also distressed by seeing her sad.
He tells her that she will be present with him. Both souls are connected to each other, so there is no question of separation. There is no question of death.
The poet finally concludes that love is immortal.

4 thoughts on “English Summary: Sweetest Love I Do Not Goe | John Donne”