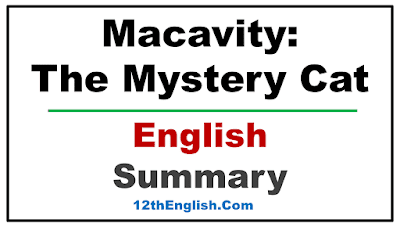 Poem – ‘Macavity: The Mystery Cat’ T.S. Written by Eliot.
This poem is laughable.

The poet has jokingly described her cat’s mischiefs.
About his cat, he explains that his cat ‘Macavity’ is a tall thin and very clever cat.
It is so vicious that it comes underfoot and no one knows.
It does not leave any sign after committing the crime.
Nor is it ever caught red-handed by anyone.
It reaches everywhere around us but no one knows its activity.
It deceives people.
It cannot even complain to the police because they do not have claw marks so that it can be identified and apprehended.
It is not a common criminal, it is a master criminal, who specializes in breaking laws made by humans as well as natural laws.
That is why the poet calls it ‘The Mystery Cat – Mysterious Cat’.